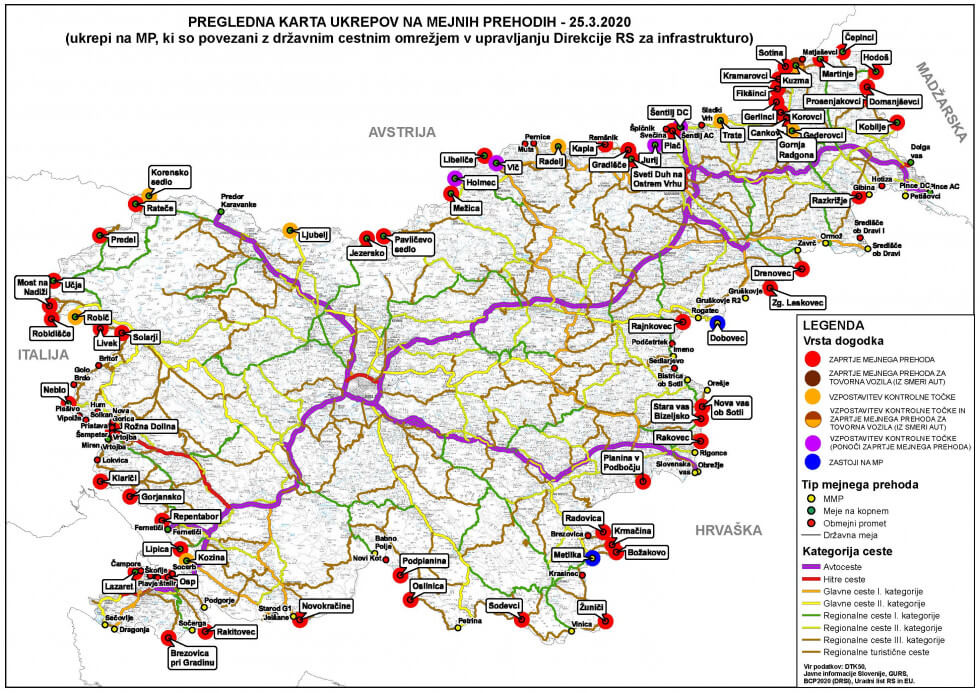 Slovenia has announced it will establish thirteen new border checkpoints at the common border with Austria. Their establishment and operation have been decided by the government itself, which has issued a Decree on Determining the Conditions of Entry into the Republic of Slovenia from the Republic of Austria for the Suppression and Control of Infectious Disease.

Due to the Ordinance thirteen checkpoints have been established at road junctions in the border area with the Republic of Austria and are fully operative as of midnight March 25, located as follows:

Checkpoints are open at all times except the one Holmec – Grablach, which is open from 5am to 9p, the ones Jurij – Langegg and Sentilj (main) – Spielfeld (Bundesstrasse), open from 6am to 9pm, and the one in Vic – Lavamund and Root Saddle – Wurzenpass, open from 5am to 11pm.

Different Rules of Entry as of Midnight, March 25

The Slovenian Ministry of Interior has followed with another announcement upon the establishment of the 13 new checkpoints at the border with Austria, explaining that entry permission rules from those coming to Slovenia from this border have changed.

All Slovenian citizens and persons with permanent or temporary residence in the Republic of Slovenia will be permitted to enter Slovenia from these checkpoints without any additional requirements.

However, the Ministry explains that entry to Slovenia is allowed only for foreigners who submit proof in Slovenian, English or German not older than three days that he/she has performed a molecular laboratory test for the presence of SARS-CoV-2 (COVID-19), which shows a negative result.

Those who do not have this certificate can be permitted to enter if they have a body temperature lower than 37.5 ° C and no clear signs of upper respiratory tract infection.

However, entry for transit of persons who are assumed to be unable to leave the territory of Slovenia due to travel restrictions of neighbouring countries is not allowed.